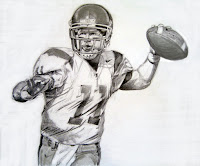 Number 11 USC Trojans - Matt Leinart - Pencil Sketch
In 2004, his junior year, Leinart won the Heisman Trophy becoming the 6th Southern Cal player to win the coveted award. He had a better season statistically in '05 and was invited back to the Downtown Athletic Club along with teammate Reggie Bush and Vince Young of Texas. Being a past winner he had a vote and place his vote for Reggie Bush - the eventual winner.

He is USC's all-time leader in career touchdown passes and completion percentage. Matt Leinart's college record was 37–2 as a starter and he finished his career with 99 touchdowns passes. He lead the Trojans to the 2004 BCS National Championship beating Oklahoma 55-19 in the Orange Bowl. His #11 USC jersey has been retired.
Posted by Noah Stokes at 5:23 PM No comments:

A Number With Meaning

Number 10 Vince Young - Pencil Sketch
VY was runner up to Reggie Bush in the 2005 Heisman Trophy voting, but did win the prestigious Davey O'Brien Award which is given annually to the best collegiate quarterback in the nation. Young lead Texas to the '06 BCS Championship with a memorable individual performance and Rose Bowl victory over USC. Despite his unorthodox throwing motion the Longhorns Quarterback was just as dangerous with his arm as he was with his legs. Young had a win/loss record of 30–2 as a collegiate starter , ranking him #1 of all UT quarterbacks by number of wins.
Vince has struggled thus far as a professional with the Tennessee Titans. However, with all of his physical talents it seems impossible that he will not one day be a starter in the NFL. Vince wears number 10 in honor of his mother who's birthday is June 10th.
Posted by Noah Stokes at 4:56 PM No comments:

6" x 9" Graphite on Bristol Board - FOR SALE
Peter Warrick was one of the most electrifying players I can remember watching play college football. He was a threat to score every time he touched the football with his speed and uncanny ability to make people miss. Number nine is the all-time leader in TD receptions at FSU with 32. He would have probably won the 1999 Heisman if he hadn't been suspended two games for the infamous Dillard's incident. In case you don't recall - a clerk at the Tallahassee department store sold Warrick and teammate Laveranues Coles over $400 dollars worth of clothes for less than $25 which the law considered shoplifting. Well, I guess they don't call it Free Shoes University for nothing.
This drawing is in pencil on 4-ply Bristol board. What I think I am going to do for here on in is post each drawing as a pencil sketch. Then go back and illustrate in detail as time permits. That way I can keep up the daily posting and I can add more detail to each completed original. Number 10 is next.
Posted by Noah Stokes at 11:00 PM No comments: 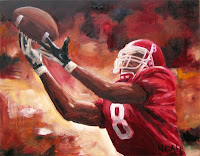 Alabama freshman sensation Julio Jones is number 8. Julio came to the Crimson Tide with much acclaim and high expectations and he not only lived up to those high hopes he exceeded them. All SEC Freshman of the year, he has speed, size, great hands and a nose for the football.

Julio is my first oil painting and it was done in one session (approximately 3 hours). I have wanted to dip into the classic medium for several years and I have finally done it. The painting is loose and while I am happy with the way it turned out, I hope to be able to refine the way I handle the paint in the future. It was fun and you can expect to see more rendering in oil in the future.
Posted by Noah Stokes at 12:00 PM 1 comment:

Will he or won't he

15" x 10" Carbon and Graphite on Illustration Board - FOR SALE
Georgia Quarterback Matthew Stafford in number seven. Will he stay for his senior season? Stafford has had a good career at Georgia and he has all of the physical skills to be successful at the professional level. He is projected to be a top draft pick. Being a UGA fan, I hope he turns his good career into a great one by staying for his final year and leading the Dawgs to an SEC title, we'll see.
This drawing is also a limited edition print. There are 200 signed and numbered prints and they retail for $20. I also have hand colored 50 prints and those retail for $100 each. I like to use carbon and graphite together because the carbon works better in the dark areas. It allows for a stronger black and more contrast. Graphite gets shinny if you go too dark.
Tomorrow is Christmas Day - come back and see who Santa left under the tree at number 8.
Posted by Noah Stokes at 2:55 PM No comments:

Number six in our count up is Jim Arnold, punter from Vanderbilt. Jim is a former Dalton High Catamount and punted professionally for 12 years in the NFL. A two time Pro-Bowler and earlier this year was selected to the All-Detroit Lions 75 Seasons Team.
This is a pencil sketch I put in Photoshop and did some digital painting on. I wonder if Santa know I would like to have a Wacom Cintiq? I'll show some more digital art later in the series. I am still learning but the computer and some of the sketch and paint software is amazing. Tomorrow is Christmas Eve and it is time for lucky number seven.
Posted by Noah Stokes at 10:29 PM No comments:

9" x 12" Ink on Bristol - FOR SALE
Number five in the series is Arkansas running back Darren McFadden. Mister everything for the Razorbacks in 2007 and the main reason head coach Houston Nutt invented the ‘wild hog’ formation. He finished second to Tebow last year in the Heisman Trophy voting. McFadden is now with the Oakland Raiders.
This is not really painting, more like slopping. I wanted it loose and speed was the objective. I used ink instead of watercolor and the red in the original is a little more crimson than the scan indicates. Tomorrow we reach a half dozen
Posted by Noah Stokes at 11:38 PM No comments:

9" x 12" Oil and Prismacolor Pencil - FOR SALE
From Folkston, Georgia, number 4, Champ Bailey. Champ is a former Charlton County Indian, Georgia Bulldog and now he is an All-pro cornerback for the Denver Broncos. He and I share the same hometown. People in Folkston still rave about some of the runs Champ made and some of the great games he had in high school. Just like they talk about those three homeruns I hit in one game against Ludowici - well actually I am the only one that ever talks about that.

I decided to add some color to Champ. My art training in commercial based, meaning I am more familiar with pens and pencils that I am the paintbrush. However, one of the reasons I wanted to start this blog was to force myself to explore different mediums and techniques. Hopefully I'll build up my nerve to take a shot at doing one in oil before we get to number 10.
Posted by Noah Stokes at 9:10 PM No comments:

9"x12" - Oil Wash and Pen & Ink - FOR SALE
Number 3 - Notre Dame Quaterback, Joe Montana. He had such a outstanding professional career (mostly with the 49ers) I bet the casual fan doesn't even know he played at Notre Dame. And I suspect that even some diehards forget that he wore number 3 for the Fighting Irish. I did this sketch in pencil then put an oil wash over it. Next, I sketched on top of that with a "sanguine" (redish-brown) colored brush pen. On top of that I used a black Bic ballpoint pen to add depth.

9" x 12" Oil Wash and Charcoal - FOR SALE
Deion Sanders lettered in 3 sports at Florida State. Football, Baseball and Track. I am not usually a big fan of the hotdog athlete but I love Deion. He was fun to watch. I think he was one of the first to wear the all the "froo-froo.” In my drawing, he has tape around his wrists and wristbands around his forearms. A long skinny towel for no apparent reason, his shirt is tied up instead of tucked in and his gloves have no fingers. I never did get the headband around the neck but that was quintessential Deion. Number 2 “Prime Time, Neon Deion Sanders”
Posted by Noah Stokes at 2:10 PM 3 comments: 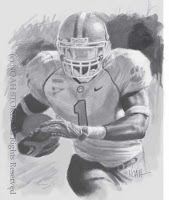 I am going to draw an athelte a day and make my subject choices based on their uniform number. Number 1 - Clemson RB James Davis gets the honor of being the first sketch. Clemson had such high hopes for this season but fell flat against Alabama and never recovered. This quick sketch is pencil on copy paper. Toned added in Photoshop.
Who will be number 2?
Posted by Noah Stokes at 11:09 AM No comments:

Noah Stokes
My work revolves around the traditions and passions of american sports - mostly college football and baseball with a few portraits and other stuff thrown in. Look around and let me know what you think.